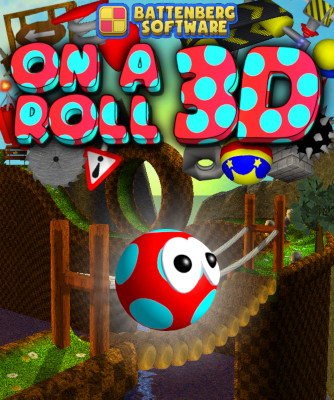 Our favourite spherical hero is back, only this time in glorious 3D! Can you navigate through 24 huge levels across 6 different themes? Be prepared to take on all the platformer classics: spikes, mines, dynamite, conveyor belts, springs, switches, doors, bumpers, lasers, saws, fire, ice, water, electricity and trapdoors, not to mention a host of enemies and bosses!
On A Roll 3D was released on 12th February 2015 on Steam for PC, and on 14th October 2016 support for Mac and Linux was added. On 2nd March 2018 it was our first release on iOS when it became available for iPad and iPhone, with full support for Game Center achievements and leaderboards. On 7th December 2018, the game became our first release on Xbox One with support for Xbox Live leaderboards and achievements.
The Steam version has a community area for the game here, which contains a forum (feel free to post - we always reply!) and an area for uploading your own screenshots and artwork. The Steam version has full controller support, and supports Steam achievements and leaderboards.
On A Roll 3D is the sequel to On A Roll, which was the first game ever released by Battenberg Software. We've written a level guide below, which gives you a few handy hints and tips on how to get through the game and how to defeat the bosses.
Here is a video trailer and some screenshots from the game. Click on the screenshots to view larger versions. You can also download the soundtrack to the game for free here.
Levels 7 - 9 DLC
On 6th May 2022 three brand new On A Roll 3D levels were released for the Steam version of the game. These include lots of new objects and game mechanics along with some old favourites. As with the existing six levels each of the new levels is split into three areas and is followed by a boss. The new levels are:
Level 7 - Space Station
On A Roll 3D takes you beyond the stratosphere to a world of planets, moons, rockets and satellites. Take a shortcut via a UFO teleporter, or go on a "moonroll" in a low gravity chamber. You'll come across some old favourites in the shape of spinning spikes, flame throwers and circular saws, each with some extra lethal enhancements, and you'll have to contend with brand new exploding stars, timed switches and space rovers. Be careful not to fall off the edge of any platforms... it's a long way down.


Level 8 - Boulder Passage
Navigate the well-worn paths and rickety, broken bridges of this arid, rocky landscape. With lots of sharp things, plenty of fire and a few explosions you'll need to make your way over narrow platforms, down steep hills and over perilous gaps to reach your goal. Complex switch systems linked to trapdoors and rotating blocks stand in your way, but you might find brief respite in the form of a game of skittles...


Level 9 - Toy Town
Bouncy trampolines, crazy beach balls and Rubik's cubes adorn this vivid world of interactive playthings, many of them highly unsafe. Make use of a new set of lever-operated platforms, take a break to play a rotating maze game or stack up your ABC blocks to reach high places. Throw in a bit of reversed gravity and you'll need all your skill and timing to manoeuvre through the colourful chaos. And if that wasn't enough you also get to fire yourself out of a cannon!
Here is a video trailer and some screenshots from the downloadable content. Click on the screenshots to view larger versions.
Level Guide
On A Roll 3D is split into six separate levels, each of which have three areas and a boss. This brief guide explains what you can find on each level, what nasties you'll have to contend with if you're to get through it and the best way to defeat each boss. Enjoy!