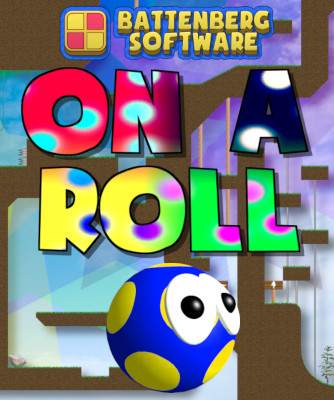 On A Roll is a platform game in which you control a multi-coloured spotted ball with eyes (don't ask) that has to travel across 16 levels of increasing difficulty over four unique graphical themes while getting past other multi-coloured striped balls (your enemies). These enemies can be killed by either jumping or falling on top of them. The game couldn't be simpler to learn to play; all you can do is move left or right and jump. But don't let that fool you - the later levels are more difficult than they look, and the four bosses present quite a challenge.
You can collect stars along the way for protection - one hit from an enemy will cost you 100 stars if you have them and one of your lives if you don't. Falling off the bottom of the screen also costs a life regardless of how many stars you have.
On A Roll was Battenberg Software's first game, and was released on the Xbox 360 via Xbox Live Indie Games way back in September 2009. It remained on the marketplace until its closure in October 2017, but in March 2017 it was released on Steam as downloadable content for On A Roll 3D - it's sequel. The game is still available on Steam, but you must own On A Roll 3D to play it.
Here is a video trailer and some screenshots from the game. Click on the screenshots to view larger versions. You can also download the soundtrack to the game for free here.
Level 1 - Round The Garden
Round The Garden is the first level of On A Roll. The first three areas are an introduction to the basic concepts of the game and only contain the first two types of enemies (the ones that roll back and forth on the floor and the ones that bounce up and down). The fourth area is home to the first boss - a larger version of the first type of enemy that is surrounded by balls of spikes and takes eight hits to defeat. Below are maps of each of the four areas - click on them to view a larger version.

Level 2 - Redbrick Road
Redbrick Road is the second level of On A Roll. This level sees the introduction of the "balls of spikes" - that are deadly from all angles and cannot be destroyed. The next type of monster is introduced in area 1 - one that moves through walls towards you and back again, and the one after that in area 3 - which cunningly moves away from you when you are in the air and towards you when you are on the ground! The second boss is a larger version of the second type of monster (the one that bounces up and down) and takes 12 hits to defeat. The maps are below - click on them to view a larger version of each area.

Level 3 - Arctic Roll
The third and biggest level of On A Roll is a snow- and ice-themed level named after a frozen dessert. This is where the game starts to get a good deal more challenging, particularly Area 3 which is the biggest area in the game. The beginning of Area 1 sees the introduction of a new enemy that flies through the air (and walls) in a straight line towards you, and won't give up until you outrun it, kill it, or it kills you! Area 2 gets even nastier - some of the enemies here are covered in spikes and cannot be killed. The boss is a tricky one that will move towards you then away from you and like the previous boss will be covered in spikes for a short time. Working out the pattern of its movement is the key to defeating it. Maps of the four areas are below; you can click on any of them to see a larger version.

Level 4 - Desert Dash
This is it - the final level. The first three areas of Desert Dash are somewhat smaller than their Arctic Roll counterparts, but don't let that deceive you - they're undoubtedly the most difficult yet with more enemies, more hazards and less stars than any of the previous levels. In Area 1 you'll come across every type of enemy you've already seen so far in the game including a number of the "chasing" enemies that were introduced in Arctic Roll, only this time covered in spikes, so they cannot be killed. Area 2 has no enemies but plenty of sharp things, so you'll need to be careful to avoid just about everything (and make sure you have a decent run up for the pits of spikes). In Area 3 you only have 100 stars to get you past no less than 18 deadly pits and plenty of enemies, including a new one that bounces around the level, usually making an appearance when you least expect it. But the boss on Area 4 is the biggest challenge of all. If it looks easy at the beginning, just wait until it speeds up...