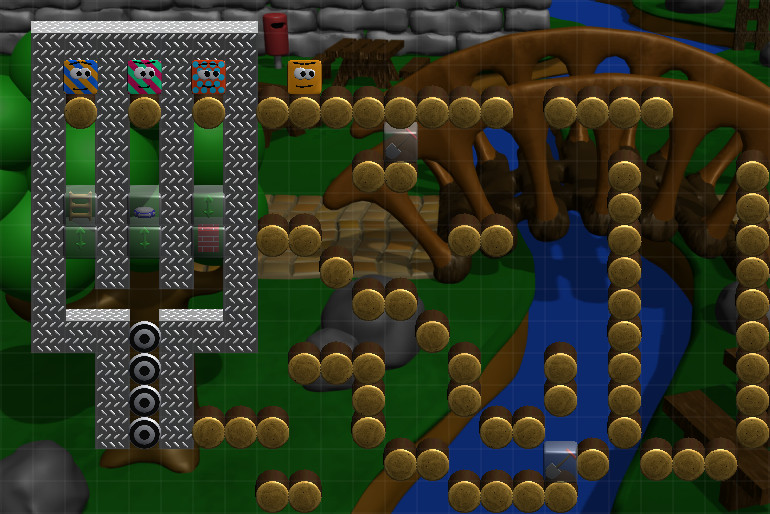 
In fact in the level shown in the screenshot above there isn't a 2D sprite to be seen. This is because the logs, the metal tiles, the ladders and even the squares themselves are 3D models that have been arranged into a 2D plane with an orthographic camera (which removes the field of view and prevents objects that are further away looking smaller). Look, we can prove it: 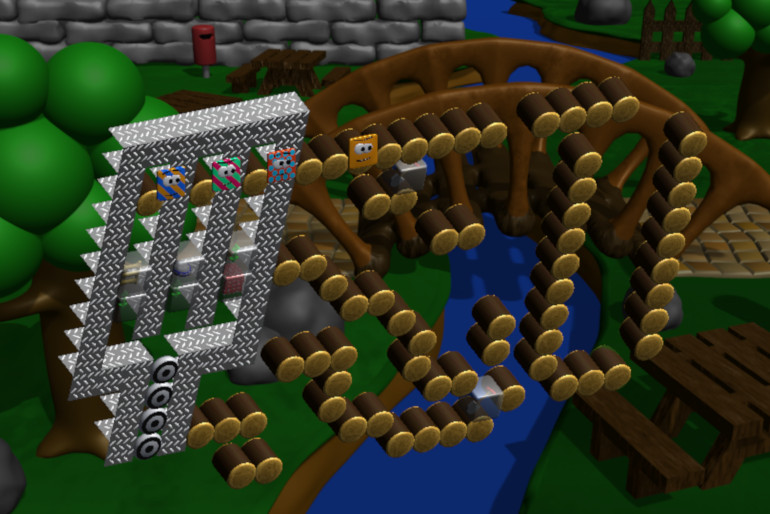 
The screenshot above shows the camera rotated slightly to show how the scene is constructed in 3D space. The level objects are placed in a grid formation with a slight tilt forwards so ones higher up the level appear in front of ones lower down. The angle of the camera during normal gameplay compensates for this to make the scene look flat. Note also that only the visible parts of the tiles are modelled - the edges of the metal tiles for example do not exist because they are never seen.
Basically what we've done here is create 3D models of all the possible level components, implemented a few lighting techniques, arranged them in the form of a level and stuck a camera in front of them. But why didn't we just draw them in 2D?
Surely Designing 2D Items is Easier?
Well that depends what you're going to do with said items. We've done pure 2D before, and whereas an item such as a wall will probably only need a single sprite, characters will require multiple ones in order to animate them. Take a look at the character sprites from The Food Run for instance: 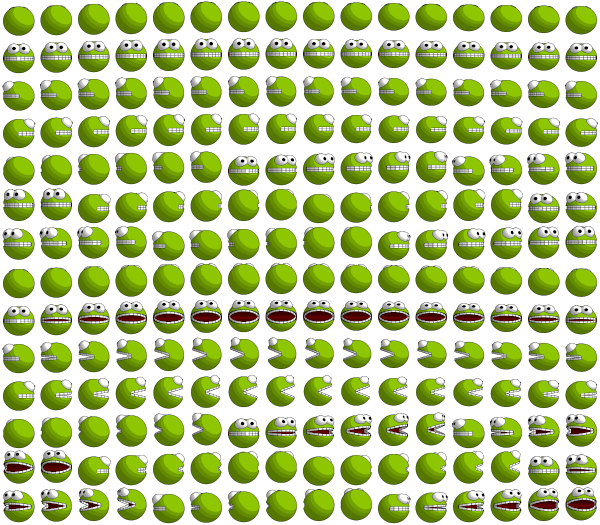 
That's a lot of sprites, and sprites take up memory. Because Square Route uses a single 3D model for the main character, it is possible for us to manipulate that character however we like without having to generate additional resources. Take for example when a square hits a turntable. This is what it looks like:

The animation for the character in Square Route using a turntable


The rotation of the character would only be possible in 2D if every frame was drawn individually, but in 3D this can be achieved by simply rotating the model and letting the camera rendering do the rest. It can also be achieved at any level of precision; the images above were taken every 3 frames and an entire rotation is actually 32 frames long. That would necessitate 32 separate sprites if we'd gone down the 2D route. The turntable also shrinks as it is used, and although this would technically be possible with a 2D sprite, another advantage of 3D is that however a model is positioned, rotated or scaled, the shading caused by the scene lighting is automatically calculated and changing such settings can be done in real-time without regenerating the models.
Admittedly there are some games out there with wonderful manually-drawn 2D artwork, so which technique is used depends on the type of game. Square Route, as its title suggests, has a geometric feel to it with identically-sized level tiles in a grid formation so the smooth shaded shapes with slightly rounded edges works well and lends itself to 3D modelling.