Blog 13 - The Digital World of 8-Bit Music
The late 1980s/early 1990s was a superb era for gaming. The coin-operated arcade machines that had burst onto the scene a few years earlier (Space Invaders (1978), Pac-Man (1980)) were being ported to home computers, and a plethora of new titles that would become instant classics were being released (Tetris (1984), Sonic the Hedgehog (1991), Lemmings (1991)). Despite our venture into the games industry occurring a couple of decades later, our titles here at Battenberg Software were influenced by games from this time period more than any other. What can we say? We like to develop what we like to play!
As newer generations of computers and consoles were released and hardware was improved, so too was the possible range of music and sound effects that became synonymous with these games. Eventually it was possible to output a digital representation of any sound wave which opened up the possibilities of pre-recorded music and speech, and since then there has been nowhere else to go, other than improvements in sound quality. But before this, sound was generated by computer chips that were restricted in what they could output. Such chips generated individual notes using waveforms that could be varied to sound like different "instruments". Playing multiple notes simultaneously could then be used to achieve music. Music like this is often labelled by the generation of machines it originated from - e.g. 8-bit or 16-bit.
Making 8-Bit Music
Take the ZX Spectrum (one of the greatest computers ever made). A pioneer from the 8-Bit era, early incarnations of the machine had a single "beeper" that could produce one note at a time at any given pitch. So limited was this functionality that the computer was incapable of performing any other tasks at the same time, meaning gameplay had to temporarily freeze while sounds were played. Later models contained an AY-3-8910 sound chip which allowed music and sound effects to be played at the same time as other operations were carried out, and had three channels that could play notes simultaneously. The sounds were simple waveforms with changeable volume and pitch, and it was this concept we decided to take further.
Our Xbox 360 Indie Games Minigame Marathon and Micromazes used sampled sounds from the ZX Spectrum to create their music tracks and sound effects. Admittedly we cheated slightly and added some sampled drumbeats and a few effects to give the sound a bit more body, but the basic principles were there. But we wanted to go deeper and to explore how these sounds were made. That's why we created...
8-Bit Tracker
Shameless plug warning... how do we intend to create such compositions for our games going forwards? Using a Unity Asset. That we created! 8-Bit Tracker is available on the Unity Asset Store now and allows for the creation of 8-bit-style music using waveforms, instruments, patterns and tracks with support for volume effects, chorus, echo and much more. As with all our assets, we'll be using it for our own games. 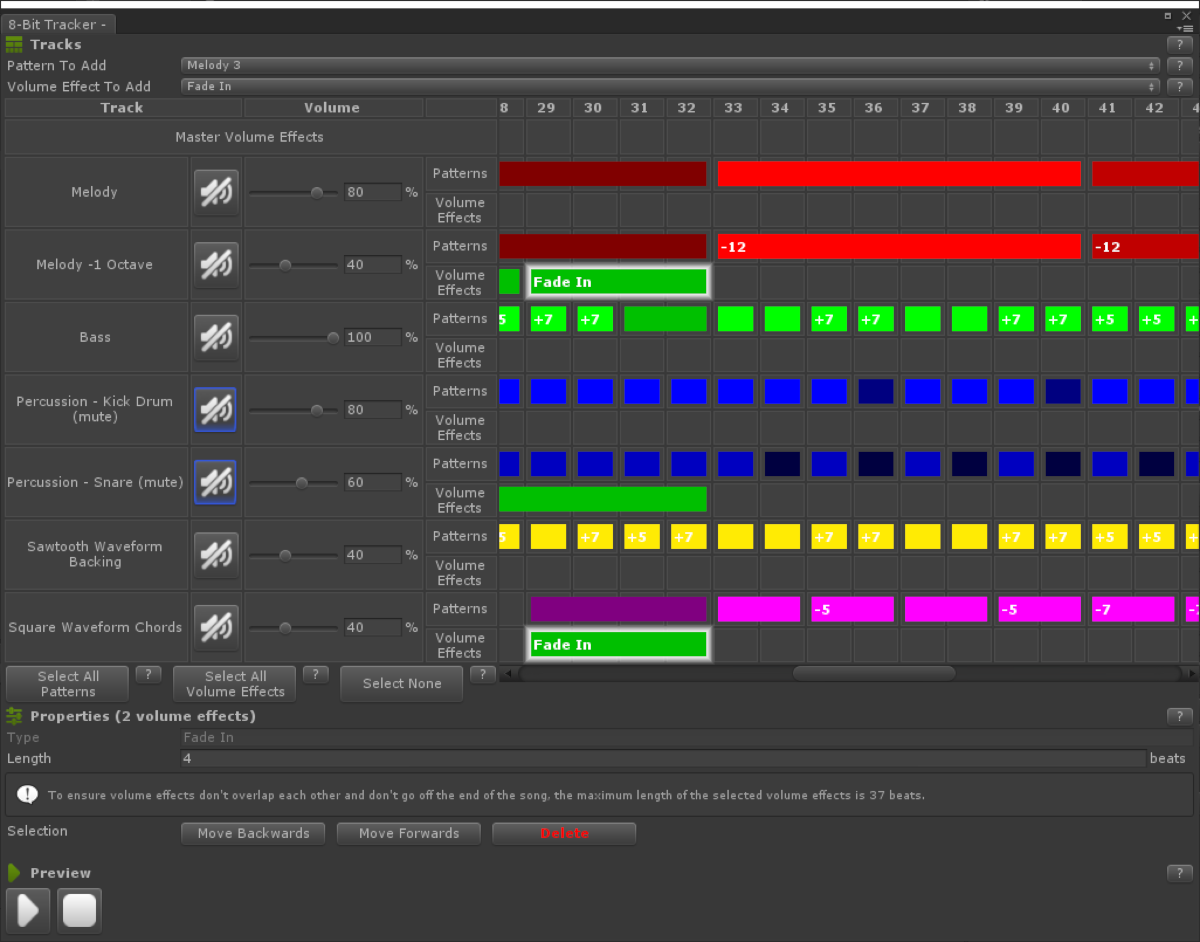 
8-Bit Tracker was fascinating to develop. We learnt how simple analogue waves, such as a sine wave, generate a particular tone which can be varied in pitch (wavelength) and volume (amplitude), and how its digital representation can produce amazing sound just like the hardware chips of old.
Why?
Computer game music from this era has a unique sound that, for us at least, evokes memories of a time when games were simpler, much more fun and fit into 48K of memory. It fits perfectly with the colourful, pixelated graphics of platformers and puzzlers that were fun, frustrating and rewarding in equal measures. To us, 8-bit music and sound effects can be the final touch to creating that retro masterpiece. Expect more from us in the future!